skip to main | skip to sidebar

The Wreck of the Hereward

A visit to the Philip Kennedy Centre at Largs Bay a few years ago sparked my interest in the wreck of the Vivid. It was there that I discovered a painting of the vessel.


A similar thing has happened to me again after seeing this photo of the Hereward at the Philip Kennedy Centre: - 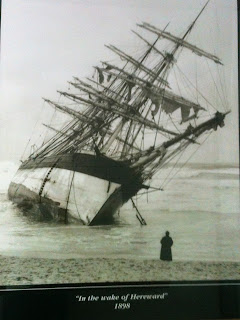 Unlike the Vivid, however, the Hereward is not a South Australian shipwreck. She was wrecked at Maroubra, NSW in 1898.


According to the web page found at http://www.randwick.nsw.gov.au/about-council/history/historic-places/shipwrecks , “The Hereward was a 1,513-ton, full-rigged iron clipper built in Glasgow in 1877. It had a length of 254 feet, beam of 39 feet, and depth of 23 feet. The Hereward was a trader to the colonies, making frequent trips from London to Sydney with general cargo.”


Her total wrecking in 1898 occurred in two separate incidents, with the second incident breaking her in two.


According to http://www.randwick.nsw.gov.au/about-council/history/historic-places/shipwrecks , “Its fateful last trip began in the Dutch East Indies port of Surabaya, bound for Newcastle to load coal for South America. On 5 May 1898, the Hereward was battling up the New South Wales coast in appalling weather, with wind velocities recorded up to 47 miles per hour. The Hereward was flung towards the shore by the winds, and with sails torn to shreds the captain, Captain Gore, was helpless to keep the vessel from the shore. The Hereward had blown onto soft sand at the northern end of Maroubra Beach, luckily avoiding two rocky reefs. The crew of 25 was brought safely ashore, and a party of seamen made their way to the nearby Maroubra wool scouring works to raise the alarm.


“The ship was insured for 6,000 pounds, and was sold a few months after being stranded for 550 pounds to a Mr Cowlishaw, who bought the wreck for salvage. Despite several enthusiastic attempts to refloat her, the Hereward ended up once more stranded on the beach, with the waves finally managing to break her in two on 9 December 1898.”


The web page goes on to state, “As with other wrecks on this part of the coast, thousands of sightseers made the long trek to the remote south of Sydney to view the wreck. The wreck of the Hereward lay on Maroubra Beach for many years, and by 1937 the only visible sign was a triangular shape above the water line. In 1950, Randwick Council feared injury to surfers from the wreck and began blasting the remnants. Further blasting in 1965, and by Navy divers in 1966 and 1967, has removed all trace of the Hereward.”


According to the web page found at http://www.randwick.nsw.gov.au/about-council/history/historic-places/plaques : -


'Hereward': An iron clipper wrecked at northern end of this beach between two reefs of rocks on 5th May 1898. No lives lost.


'Tekapo': A steamship wrecked on shallow reef at southern end of this beach on 16th May 1899. No lives lost.


'Belbowrie': A coastal freighter ran aground on almost same site as Tekapo on 16th January 1939. No lives lost.


The 'Hereward', a Glasgow built 1513 ton iron clipper, was a well-known trader to the colonies frequently running between London and Sydney with general cargoes.


On the night of 5th May the 'Hereward' was battling up the coast in gale force winds. The ship's master, Captain Gore, estimated the ship to be about 70 miles off the coast when a man on the bow spotted breakers. Unable to turn in the rough conditions the ship bumped heavily shoreward onto soft sand between two reefs of rock at the northern end of Maroubra Beach. As she showed no signs of breaking up the crew determined not to leave her and prepared to wait out the night until daylight. By 2.00am the weather cleared and a lifeboat was launched. In three trips the entire crew of 25 were brought safely ashore.


The 'Hereward' lay on the beach for six months before salvage attempts commenced. However, all attempts were doomed when storms thwarted salvage operations and on 9th December 1898 the final demise of the 'Hereward' occurred when large waves broke her in two.


For many years the 'Hereward''s remains graced Maroubra Beach but by 1950 Randwick Council, fearing injury to surfers, began blasting the remnants.”


According to the web page found at https://en.wikipedia.org/wiki/Hereward_(ship) , “Hereward was a British trading vessel that travelled between Britain and her colonies, especially between Sydney and London. It was shipwrecked on Maroubra Beach, Sydney on Thursday 5 May 1898. The Hereward was wrecked while travelling from Sourabaya, a port in the Dutch East Indies (now Indonesia) to Newcastle New South Wales where it was to have picked up a load of coal bound for South America. While travelling north along the New South Wales coast on 5 May, it encountered a large storm with wind speeds as high as 47 miles per hour (76 km/h). The winds destroyed the sails of the ship and blew it towards the shore leaving the captain, Captain Gore, unable to avert the disaster. The Hereward was forced onto the northern end of Maroubra Beach, however it avoided the two rocky reefs present there. All 25 crew members were safely brought ashore and made their way to the nearby wool scouring works to make the shipwreck known. The ship had been insured by its owner for £6,000.”


It goes on to state, “On 9 December 1898, (Mr. Cowlishaw) attempted to refloat the Hereward. By pulling on the rope connected to the anchor 300 metres (980 ft) out to sea and using steam winches on board, he got the ship into 14 feet (4.3 m) of water. However, as the ship was nearly free, a southerly gale blew up and pushed the Hereward back onto the beach where it was battered by high seas and broken in two. The wreck was slowly washed out to sea afterwards and by 1937 only a triangle dorsal fin was visible above sea level. In 1950, Randwick Council feared of the danger that the remains posed to surfers and swimmers and had the remains blasted such that by 1967 it appeared that there was nothing left of the ship. In recent times, on various occasions, due to large swells and sweeping currents, large amounts of sand had moved off the sea floor and had exposed extensive portions of the Hereward which were once thought to be destroyed and lost forever. In March 2013 after large seas, extensive portions of the ship's metal hull, along with mast and engine pieces were exposed to a greater extent than they ever had been before. This provided an interesting and enjoyable snorkelling experience for Maroubra locals and tourists alike.”


According to the web page found at https://www.dailytelegraph.com.au/newslocal/southern-courier/hereward-shipwreck-cannon-brings-amazing-history-back-home-to-maroubra/news-story/b887cd6a9e59c4b5bf7e268b08bc5658 , “A brass alloy cannon, probably used to deter pirates and recovered from an 1898 shipwreck off Maroubra beach, has been conserved and installed at a new home, overlooking the wreck site. ….. and by 1967 it appeared that there was nothing left of the ship. That was until March 2013 when extensive portions of the ships metal hull, along with mast and engine pieces were exposed by large seas. Recreational divers John Black, Paul and James Wright and the NSW Police Diving Unit, in conjunction with the NSW Office of Environment & Heritage, helped salvage the cannon.


“The Maroubra Seals Club Board authorised the cost of restoration of the cannon and it was shipped over to the WA Museum Conservation Laboratories in Fremantle. The restored cannon was then returned to Maroubra for the first time in 117 years to be displayed in the foyer of the Seals Club.”


A photo of the Hereward beached at Maroubra can be found on page 50 of “Sail in the South” by Ronald Parsons. The photo is one of the shipping photographs to be found in the Edwardes Collection in the State Library of South Australia. Another photo can be found opposite page 33 of “Sea Adventures and Wrecks on the NSW South Coast” by Jack Loney. Details about the vessel are on pages 55-6.


The book provides further insight in to the attempted recovery of the vessel on 9th December 1898: -


“By steadily pulling on a cable connecting the vessel to an anchor about 300 yards out to sea she was gradually worked seawards until she stuck on a sand bar and resisted all efforts by two tugs to free her. However, using steam winches the men on board freed her and had her riding in 14 feet of water when a southerly gale blew up. Being lightly laden the HEREWARD tossed badly and eventually her cable parted and she drifted ashore where she was battered by heavy seas, becoming a total wreck.”
Posted by Steve Reynolds No comments:

There are plans to scuttle the decommissioned HMAS Darwin as a dive wreck off the East Coast of Tasmania. There is, however, a group of people who are opposed to the proposal.
Posted by Steve Reynolds No comments:


Ewens Ponds is now closed to all water-based activity until Sunday 2nd December 2018. The closure applies to all bodies of water in the reserve. As such, no diving or swimming is permitted in the ponds during the closure period. The purpose of the closure is for the proper management of the reserve. For further information contact: Mount Gambier Natural Resources Centre, Phone: 08 8735 1177.

Posted by Steve Reynolds No comments:

The Ewens Ponds Conservation Park will be closed from 4th September until 3rd December 2017. The closure applies to all bodies of water in the South Australian reserve. As such, no diving or snorkelling is permitted in the ponds during the closure period. Before diving or snorkelling at Ewens Ponds Conservation Park, you should check which qualifications and permits are required.
Posted by Steve Reynolds No comments:

The Advertiser of 7th August 2017 reported that strict new limits on the amount of berley that shark cage diving operators at Port Lincoln, South Australia can use to attract sharks have been reduced. The two operators using berley are now restricted to 120kg of berley and teaser baits per trip. The amount of berley that they can use will be further reduced next year, when they can only use 100kg per day (or trip?). A further restriction placed on the operators concerns when a shark either grabs a teaser bait or crashes into the cage while trying to eat the bait, all berleying activity must cease for 15 minutes. These new restrictions aim to reduce the amount of berley being used and to stop sharks being fed during such activity.
Posted by Steve Reynolds No comments:

The 2017 MLSSA Calendar is still available at half of the usual price ($5 ea + postage). Some calendars are available for sale from Underwater Sports Diving Centre, Diving Adelaide, The Scuba Clinic and the Conservation Council of SA. You can order your copy by contacting: Steve Reynolds: (08) 8248 3008 Mb: 0401821264 Email: stevereynolds600@gmail.com or Phill McPeake: (08) 8384 1156 Mb: 0414373444 Email:prmcpeake@internode.on.net . Visit www.mlssa.org.au for more details.
Posted by Steve Reynolds No comments:

Steve Reynolds
Adelaide, South Australia, Australia
A scuba diver & President for the Marine Life Society of SA. Involved with the Scuba Divers Federation of SA since the mid-1980s. The Federation's Secretary since 2001. A GIRT scientific diver. A founder of Dragon Search. Australian scuba diving rep for Redmap.